Mass social movements in the Western World date predominantly from the nineteenth century. Over the last 200 years they have had a great impact on our politics and have often defined the parameters for our public debate. Since they will continue to do so we need to understand them if we are to understand how our social and political system works.

This slide lists the major mass social movements from the 19th Century to today. 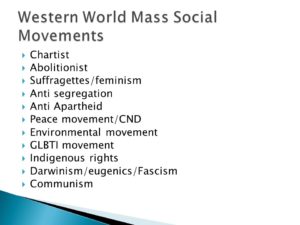 All Mass Social Movements arise out of popular discontent. They always begin as a struggle against some injustice or wrong that affects a large body of people.

Effects have causes. Mass social movements cannot appear out of thin air or because someone thinks it’s a good idea. For example, Christianity ……