It is impossible to understand climate science or the climate change debate without a basic understanding of how science works.

Science is about understanding cause and effect based on measurement and observation. Scientific certainty can be understood as a series of concentric circles. Mathematics, chemistry and applied physics are at the center of the circle. In these disciplines all the variables can be controlled in experiment and the same results can be obtained. From this observation scientific truths can be arrived at with complete certainty. These are the foundational disciplines of all science.

In the second circle sit those disciples that derive from the previous three. They include for example geology, electrical and mechanical engineering, astronomy, and geomorphology. These first and second circle disciplines are the ‘hard’ sciences which are reliable and provable.

In the next third circle are other empirical disciplines where it is more difficult to isolate the variables but results can be tested and confirmed. This includes genetics, veterinary and medical science, microbiology, psychiatry and plant science.

In the next fourth circle are disciplines that are more reliant on survey data and statistical analysis. They include meteorology, oceanography, zoology, and ecology.

In the next fifth circle are disciplines which require substantial amounts of interpretation based on assumptions. These include paleontology, anthropology, and the social sciences.

The first to fourth circles provide the scientific basis for industrial civilisation.

What is the Climate Change Thesis?

The climate change thesis was first mooted in the 1970’s but there was insufficient data at that time to test the theory. As climate changes were observed the thesis began attracting policy interest and funding so that by the end of the 1990’s a substantial body of data from numerous disparate disciplines and sources had been obtained. Based on this data a number of climate models were developed and predictions made. These largely came to pass during the first decade of the 21st century and the thesis is now considered proven by the majority of scientists who have worked in climate change science or who have considered the data.

The climate change thesis does not say that everything will get hotter all the time.

How Does Climate Science Work?

In the case of climate science, it is not possible to put the world in a test tube and isolate all the variables. Similarly, we do not have two planet earths where we can use one as a baseline for comparison and conduct experiments on the other. Therefore, our understanding of climate relies on making observations over time (including historic observations), making predictions based on these observations, and then testing these predictions by further observation. There are many tools for making observations. Some key ones are:

This is how all natural resource management works. It is how forestry, fisheries, game and conservation management work. It is also how climate science works. Climate science thus belongs in the third and fourth circles in that, while it is based on fundamental physics and chemistry, it relies extensively on projections based on survey and trend data. The climate change thesis is one aspect of climate science.

Outside of the first two circles of science absolute certainty is a rare thing. Rather decisions are made on the basis of high degrees of probability. A scientific theory is considered reliable or proven if it can be relied upon to make accurate predictions. Climate change scientists have predicted that climate change will lead to the following:

Only the last of these is disputed by climate skeptics since the rest are clearly observed.

Also, with something as complex as global climate, there will be things which were not predicted. For example, Antarctic sea ice has thinned but the total amount of sea ice cover has expanded. That is because ice melt has made the sea water less saline. Being less saline it is lighter and migrates to the surface sea layer. Since temperatures are colder at the surface, and fresher water freezes at higher temperatures, large areas of ocean surface have now frozen. In the Arctic on the other hand, there has been more rain and less snow. The rain sometimes freezes into an ice layer and snow then falls on top. Caribou are able to dig through the snow but cannot always break through the ice to get to the moss they eat. As a keystone species, this presents a risk to Caribou numbers but also to the wider ecology of the Arctic.

Why Do People Object to the Thesis?

The contrary view points out that although there are indicators of a changing climate, there is nothing new about climate change. The climate system is not static and significant fluctuations in temperature and sea level have all happened repeatedly in the recorded historical past and in pre-history. Indeed the long history of Australia is the history of catastrophic climate change and of human adaptation to it. The existence of wadis, dried up river systems, in the Middle East for example, bear testimony to the reality of catastrophic climate change occurring millennia before the industrial revolution. Some wadis are referred to in the Bible and were already ancient in ancient times.

Indeed, an increase in sea level of several centimetres and an increase in mean temperatures of 2 degrees centigrade are all well within the range of historical experience which occurred before the use of fossil fuels. Greenpeace co-founder and ecologist Dr Patric Moore puts the case in detail here: The Truth About Climate Change – Dr. Patrick Moore – Greenpeace Co-Founder – YouTube

Many have noted that, far from being a pollutant, carbon is the ‘God chemical’ that makes life possible on planet earth. All living things are carbon based. Burning fossil fuels simply releases back into the atmosphere the carbon that was taken out of the atmosphere and converted to coal and oil. This atmospheric carbon is then available to plants, speeding their growth and greening the planet. In other words, climate change is not inherently bad. As with all changes, there will be positives and negatives, winners and losers.

The other issue that sits well below the radar of any public discussion is the role of weather modification programs. Both the Soviet Union and the USA ran weather warfare programs that involved heating the upper atmosphere using specific wave frequencies in order to move clouds and influence weather patterns, for example, to cause drought and crop failures or adverse weather conditions over enemy territory. In the USA this program was called the High Atmospheric Research Program (HARP) and was disguised as a civilian research program. Contemporary HARP installations are known as ‘doppler installations’ and in all likelihood exist in multiple locations around the world. There is anecdotal evidence that they are used offensively to achieve US foreign policy objectives  and have led to speculation about broader agendas. In addition, during the Cold War approximately 1000 nuclear bombs were detonated in the atmosphere releasing vast amounts of heat.

Should we Act on Climate Change?

That depends on your values and agenda. For example, if you are a petroleum exploration company, global warming is in your interests because a reduction in land and ocean ice cover will open up the Arctic to oil exploration. That precisely accords with the foreign policy if the Russian Federation. If you are a farmer on marginal land in a developing country, changes in climate may bring famine. Really it’s about risk.

If the thesis is false and no action is taken nothing is lost.

If the thesis is false and action is taken, some costs will be incurred unnecessarily. However, we will be much better positioned in the longer term to manage other challenges such as increasing energy demand and reduction in the supply of cheap coal and oil.

If the thesis is true and no action is taken, the economic, social and environmental costs will be very high.

If the thesis is true and action is taken, these costs will largely be avoided.

This basic logic reflects standard risk management methodology. In simple terms risk is assessed by charting the seriousness of the event against the probability of it happening. An event which is likely to happen and will have serious consequences presents a critical risk. On the basis of the same risk management methodology used in every other discipline, climate change now represents a critical risk. 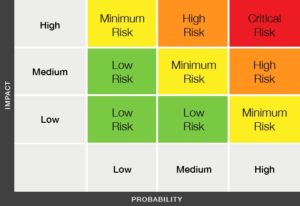 However, before any action is taken we must understand that what is currently driving climate policy is a toxic cocktail of centralised control agendas, base profit motives, base political motives, and existential hysteria. The demand that the West now fully de-industrialise and accept dramatically lower living standards while China and India cash-in, suggests an agenda more concerned with destroying the West than with saving the planet. Significant questions about power, control, weather manipulation, and the basic science, remain unanswered.