‘Full spectrum dominance’ normally refers to overwhelming military superiority across all military domains, that is, air, land, sea, space, cyber space, the electronic spectrum, nuclear and biological warfare; and includes propaganda and psychological operations. It is the official doctrine and goal of the United States military. It explains little things like why the US transport aircraft is called the ‘Globe Master’, and it explains big things like surrounding Russia with early warning radars and nuclear capable cruise missiles. It also explains other terms like ‘Global Strike Capability’ which is the ability to strike any target anywhere on the planet at short notice.[1] The US Department of Defense has now divided the entire planet into different ‘Commands’.[2] 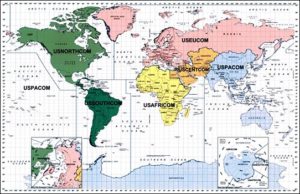 Source: US Department of Defense

In more recent times the concept has been extended to the civilian realm where US foreign policy is directed at obtaining full spectrum dominance of the global financial system, trade in services, global food supply and seed storage, control of internal policy making within target nations, and even now extends to social policy such as homosexual marriage.[i]

Full spectrum dominance is of course the goal of all great empires. The British empire…