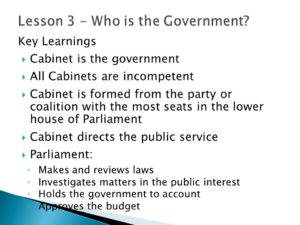 In the constitution of the United States they have a doctrine that ultimate political authority resides with the people. In Commonwealth countries, such as Australia, Canada and New Zealand, we have the doctrine that power ultimately resides with Parliament. There is no equivalent doctrine of ‘we the people’. There are some around who advocate the idea that ‘we the people’ have some kind of constitutional right to rise up in defence of liberty but really that’s an American import. In the Commonwealth constitutional system, also known as the ‘Westminster’ system, power does not reside in ‘the people’ it resides in the Parliament.