In this second lesson we are going to explore what rights and freedoms we have as Australians and where they come from.

We also learned that the High Court of Australia has the final say in how the Constitution of Australia Act is interpreted. 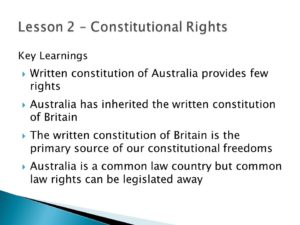 So do we actually have any constitutional rights or guaranteed freedoms?

I find that people have watched a lot of American TV and assume that because we live in a free country and we have a constitution it must be a bit like the American one and give us some rights. Then there is another group of people who assume that we have inherited a lot of rights from Britain. What rights do we actually have?

I am going to jump straight to the conclusion and then take you on a journey to see how we got there.

You might think that, if the founding fathers were going to go to the trouble of framing a written constitution that they might have put something in there are about basic freedoms and your rights and duties as a citizen. Well, you might think that but you would be wrong.